How can sentient beings support a minimum wage?

Ask supporters of a minimum wage what would happen if it was raised to $100 per hour. Once they admit it would lead to massive job losses they’ve accepted the principle, from which point its failings are obvious to all intelligent people

Am I dumb enough to want a minimum wage?

If I banged my head against the wall every time politicians advocated bad policy in Washington -- which is a tempting impulse -- I would have been institutionalized because of brain damage a long time ago.

Just ask them, for instance, what would happen if the minimum wage was raised to $100 per hour. Once they admit that would lead to massive job losses, they’ve accepted the principle and it’s simply an empirical issue of figuring out how many jobs are lost when the minimum wage is $75, $50, $20, $10, $6, etc.

At the risk of stating the obvious, businesses seek to make money and they won’t hire somebody who can only produce $6 of value per hour if the government says that person has to be paid $7.25.

I strongly suspect Obama and his team are pushing for a higher minimum wage for the first reason, but it’s hard to even care. All that really matters is that people will suffer if the President succeeds.

And I’m not making a partisan point. Mitt Romney and George W. Bush had the same mentality. Now, perhaps, you understand why this issue is so frustrating.

So let’s try to maintain our sanity by mocking these feckless and uncaring politicians. Here are a couple of good cartoons on the topic, beginning with a clever contribution from Lisa Benson. 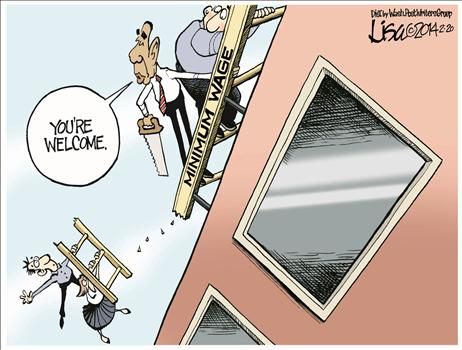 This Steve Breen cartoon makes the same point, showing how the poor are disadvantaged. 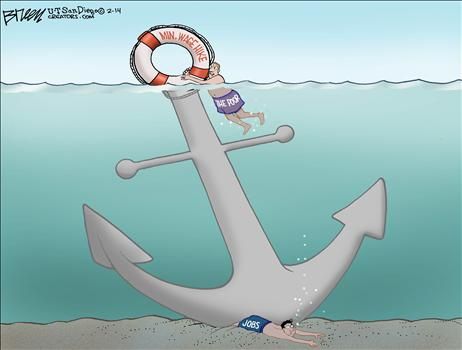 I also would recommend this video if you want to learn more about the minimum wage, and if you want to understand why this issue gets me very frustrated, check out this interview.

It’s especially perverse that politicians are pushing these policies when, as Walter Williams has explained, blacks and other minorities are among the biggest victims.

Last but not least, I’m a libertarian, which means that I’m motivated by morality as well as economic efficiency. So I get equally upset that politicians think they should have the right to block a labor contract between consenting adults.

What gives them the right to tell other people that they can’t engage in non-coercive, non-violent exchange?