Obamacare: The Never-Ending Gift that Repeatedly Teaches Us that Big Government Doesn’t Work

Let’s not forget that there actually are some people who are benefiting from Obamacare. It’s too bad, though, that we can’t all be corrupt DC insiders!

Sigh. Another day, another grim Obamacare update. Actually, we have two updates on the never-ending disaster of government-run healthcare.

Our first story comes from the Washington Times, which reports that the company hired to fix the failed Obamacare website is way behind schedule and way over budget.

"Fixing the Obamacare website to get it ready to handle a second round of enrollments will cost the federal government $121 million… The deal, which Accenture announced on its website Tuesday, costs more than the $93.7 million it took to build HealthCare.gov in the first place. It’s also $30 million more than the government projected for fixes just a few months ago… “There doesn’t seem to be a light at the end of the tunnel for Obamacare website expenses,” said House Oversight and Government Reform Committee Chairman Darrell E. Issa, California Republican."

I’m mystified, by the way, why taxpayers always have to cough up more money on these contracts.

If some company promises to do X in exchange for Y amount of money, shouldn’t that contract be binding? Instead, this is just the latest chapter in the endless book of government cost overruns.

Our second story comes from the Washington Examiner, which reports that there are some big problems with Obama’s supposed success of bribing and coercing people into Obamacare.

"…officials from President Obama down have touted 8 million Americans signing up for coverage through the program’s exchanges. But, among other things, they haven’t revealed how many of those individuals formally completed their enrollment by paying their premiums. …what the committee heard back was that just 67 percent of individuals signing up for health insurance through the federal health exchange as of April 15 paid their first month’s premiums and actually completed enrollment."

Gee, if that’s a success, I’d hate to see a failure.

And the story also notes that the White House has been unable to trick sufficient numbers of young people into overpaying for healthcare. That’s very bad news for the insurance companies that put their trust in government.

"In addition, just 25 percent of enrollees were between the ages of 18 and 34, according to the report. The administration had been aiming for roughly 40 percent of enrollees to come from this younger demographic to help offset the cost of providing coverage to older and sicker participants."

I guess this means stupid birth control ads weren’t enough to get young folks to flush away their dollars. Geesh, no wonder I’m tempted to feel sorry for the President.

But let’s not forget that there actually are some people who are benefiting from Obamacare. It’s too bad, though, that we can’t all be corrupt DC insiders.

Let’s close with some cartoons from Townhall. Since we’ve already talked about the absurdity of counting coerced enrollments as an indicator of success, we may as well share a funny Glenn McCoy cartoon that makes the same point. 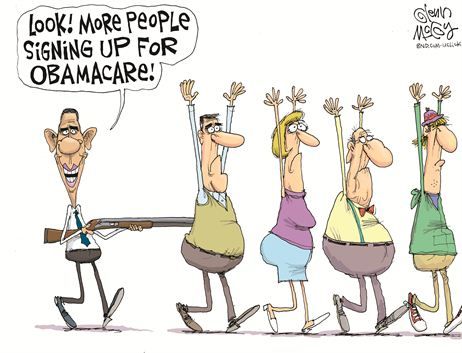 If you like this cartoon, Ted Cruz’s office put together a satirical – yet accurate – look at the “success” Obama has achieved. And this Eric Allie cartoon has the same message.

And here’s Henry Payne on Obama’s mission-accomplished moment. Reminds me of the low-expectations theme Lisa Benson used in another very amusing Obamacare cartoon. 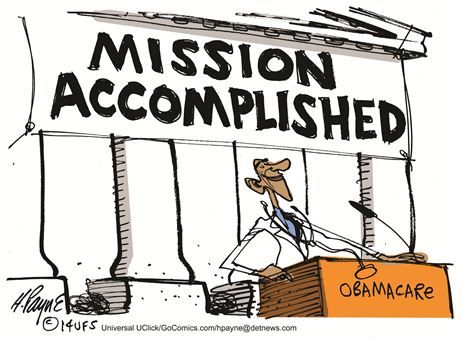 Yup, the mission has been accomplished. A few million more Americans are now more dependent on government (which Mark Steyn explained was one of the left’s main goals) and the political class has made it harder for people to achieve the American dream. 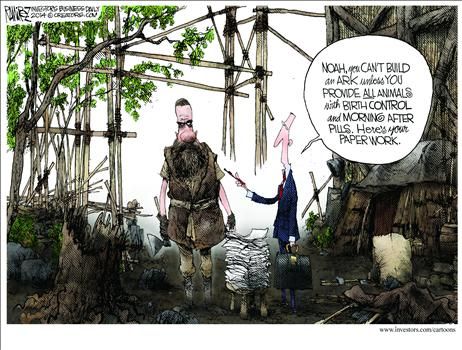 That’s because it reminds me of this joke about what would happen if Noah tried to build the ark today.