The decline in global poverty since 1970 has been dramatic, especially in Asia where China and Hong Kong offer some vital lessons. It is data like this that blows the Left out of the water

Shanghai shows the way, or at least a way

I’m currently in Asia, where I just finished a series of speeches about economic policy in China and Hong Kong. These two jurisdictions offer very powerful lessons about the importance of economic policy.

Hong Kong is supposed to be Nirvana for libertarians. It holds the top spot in the Economic Freedom of the World rankings. It has an optional flat tax. It has a private retirement system. And based on IMF data, government spending “only” consumes 18.4 percent of GDP (compared to 38.6 percent of economic output in the United States and 54.4 percent of GDP in France).

In reality, Hong Kong is far from perfect. It may have a lot more economic freedom than other jurisdictions, but there is widespread government intervention in certain sectors, such as housing. And while a flat tax and spending burden of 18.4 percent of GDP sound good, let’s not forget that the western world became rich in the 1800s when there was no income tax and the public sector consumed less than 10 percent of GDP.

But when you rank countries on the basis of economic freedom, you don’t compare jurisdictions to a nonexistent libertarian utopia. You compare them to other nations. So Hong Kong gets the top spot. And that’s paying dividends. When you look at long-run comparisons with other nations, Hong Kong has grown faster and become more prosperous.

So what about China? This wasn’t my first visit to the country, but it was the first time I went to Shanghai, and it is a very impressive place. It’s obvious that China has enjoyed a lot of growth in the past few decades.

But just as you shouldn’t judge the United States by a visit to Wall Street, it would be a mistake to draw sweeping conclusions about China after a few days in Shanghai.

Indeed, average living standards for all of China are still far below American levels. Moreover, if you look at the Economic Freedom of the World rankings, China still has a lot of room for improvement. It ranks 123rd out of 152 nations, which is not only far below France (#40), but also Greece (#85), Haiti (#98), and Russia (#101).

This has led to some wonderful outcomes. This chart (h/t: Mark Perry) shows the share of the world’s population living on less than $1 per day (blue line) and the share of East Asia’s population with the same level of deprivation (red line). A big reason the red line has fallen so dramatically is that severe poverty in China has largely disappeared. 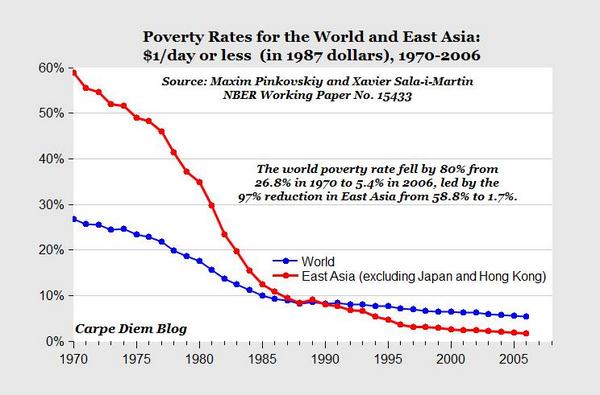 The real question for China is the degree to which there will be ongoing improvement.

But I don’t think this will happen. In one of my speeches, I posed a series of questions, followed by some less-than-optimistic answers.

Is the financial system weak? (because of too much state control over capital flows and investment)

Is there too much cronyism? (with friends and relatives getting favorable access to business)

Will China’s demographics be a problem? (the one-child policy is not just tyrannical, but it also means China’s population is aging)

Is rapid growth sustainable? (in the absence of reforms to boost economic freedom)

Have stimulus plans led to malinvestment? (such as ghost cities and other boondoggles)

Since economists are lousy when they make predictions, it’s quite possible that I’m wrong and my pessimism is unwarranted. For the sake of the Chinese people, let’s hope so.

And what about Hong Kong? I suspect they’ll remain the freest economy in the world. After all, why wreck a good thing?

Then again, the United States was the world’s 3rd-freest economy as recently as 2001. Now, thanks to Bush-Obama statism, we’ve plummeted to 17 in the ranking.

But I doubt Hong Kong policy makers would be equally foolish.