The simple lesson to learn from global economics

You almost have to feel sorry for statists when they fumble, stumble, duck, and weave when asked why global evidence time and again shows that more free markets and lest statism dramatically raises prosperity for all

I very rarely feel sorry for statists. After all, these are the people who think that their feelings of envy and inadequacy justify bigger and more coercive government. And I get especially irked when I think about how their authoritarian policies will hurt the most vulnerable in society.

But I nonetheless feel sorry for statists when I see them fumble, stumble, duck, and weave when asked why global evidence contradicts them.

In other words, it’s almost painful to watch when they are asked  why nations with varying degrees of statist policy – such as Venezuela, France, the United States (under Obama), Argentina, and Greece – suffer from economic stagnation and decline.

And it’s equally uncomfortable to watch them struggle and squirm when they’re asked to explain why jurisdictions with more pro-market policies – such as Bermuda, Estonia, Switzerland, the United States (under Reagan), Chile, and Singapore – tend to enjoy growth and rising living standards.

However, I can’t help adding to their discomfort. Let’s look at more evidence. Here’s some of what Richard Rahn wrote for the Washington Times about Hong Kong’s economic miracle.

"Hong Kong is about as close to the ideal free-market capitalist model that you can find on the planet — which came about largely by accident. …The British basically left Hong Kong to fend for itself… here was no foreign aid and no welfare state — but there was a competent government that kept the peace, ran an honest court system with the rule of law, provided some basic infrastructure, and little more.

"Also, Hong Kong had economic freedom — for the last several decades, Hong Kong has been ranked as the freest economy in the world (according to Economic Freedom of the World Index). Economic freedom allowed the people to create an endless number of productive enterprises, and because they had free trade, they could import necessary goods and services to fuel these enterprises. …average real income has gained parity with the United States, and it will probably be double that of France in a couple of years."

By the way, if you don’t believe the last sentence in that excerpt, check out this remarkable chart.

But the big takeaway is that free markets and small government have made the people of Hong Kong very rich. Gee, it’s almost as if there’s a recipe to follow if you want prosperity.

They explain that statist policies in Ukraine have stymied growth in a nation that otherwise could be very prosperous.

"There is no better modern example of the power of an economic triumph than the experience of Ukraine and Poland in the post-Cold War era. …Ukraine has largely squandered its economic potential with pervasive corruption, statist cronyism and government control. …The per capita income of Ukraine, in U.S. dollar equivalence, has grown to only $3,900 in 2013 from a base of $1,570 in 1990.

"…Ukraine should be a wealthy country. It has world-class agricultural land, it is rich in hydrocarbons and mineral resources, and it possesses a well-educated labor force. Yet Ukraine remains poor, because while successful Central European nations have replaced their central-planning institutions with market-based reforms, Ukraine has never been able to break the crippling chains of collectivism." 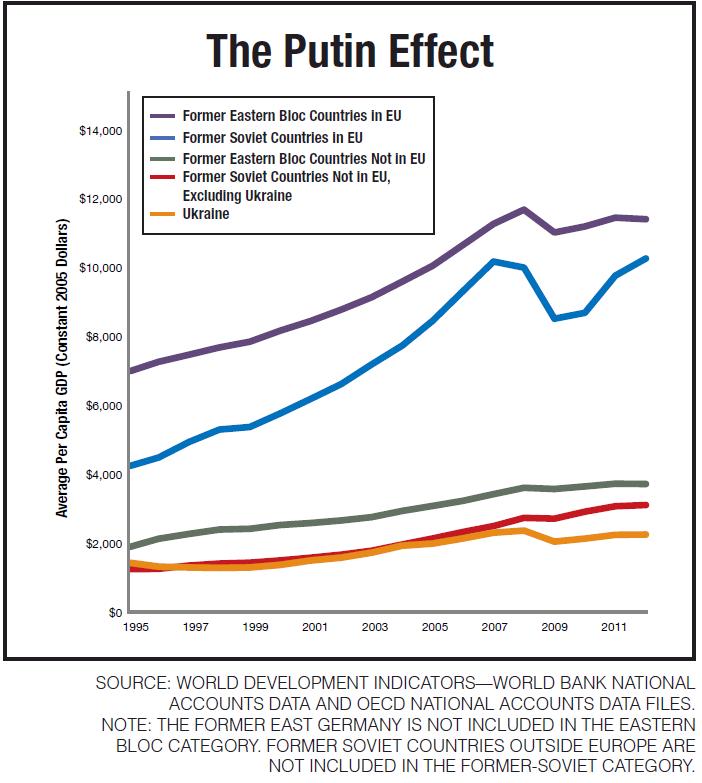 Poland was in the same position as Ukraine after the collapse of the Soviet empire, but it followed better policy and is now several times richer.

"By employing free-market principles and unleashing the genius of its people, Poland has triggered an economic triumph as per capita GDP, in U.S. dollar equivalence, soared to more than $13,432 by 2013 from $1,683 in 1990. Today Poland is the fastest-growing economy in Europe. …The man largely responsible for Poland’s transformation is Leszek Balcerowicz, the former finance minister who was later governor of Poland’s Central Bank.

"…The Balcerowicz Plan was built around permitting state firms to go bankrupt, banning deficit financing, and maintaining a sound currency. It ended artificially low interest rate loans for state firms, opened up international trade and instituted currency convertibility. …A miracle transition was under way and the rest is history."

Since I’ve also compared Ukraine and Poland, you can understand why I especially liked this column.

One final point. Today’s post looks at just a couple of nations, but I’m not cherry picking. There are all sorts of comparisons that can be made, and the inevitable conclusion is that markets are better than statism.

Here are some previous iterations of this exercise.

The data for Chile, Argentina, and Venezuela is very powerful.

Here’s a comparison of Sweden and Greece.

And we can see that Hong Kong has caught up with the United States.

So hopefully you can understand why I have a tiny (very tiny) degree of sympathy for my left-wing friends. It can’t be easy to hold views that are so inconsistent with global evidence.

P.S. When presented with this kind of evidence, leftists oftentimes will counter by saying that many nations in Europe are rich by global standards, while also having large governments. True, but it’s very important to understand that they became rich nations when they had small governments. Moreover, some of them have wisely compensated for large public sectors by maintaining ultra-free market policy in other areas.