The United States now has the highest corporate income tax rate in the industrialized world. America’s Tax System Ranks Below Italy, Greece, and Mexico. Another fine example of US leadership, these days

I’ve complained over and over again that America’s tax code is a nightmare that undermines competitiveness and retards growth. Our aggregate fiscal burden may not be as high as it is for many of our foreign competitors, but high tax rates and poor design mean the system is very punitive on a per-dollar-raised basis.

For more information, the Tax Foundation has put together an excellent report measuring international tax competitiveness. Here’s the methodology.

"The Tax Foundation’s International Tax Competitiveness Index (ITCI) measures the degree to which the 34 OECD countries’ tax systems promote competitiveness through low tax burdens on business investment and neutrality through a well-structured tax code. …No longer can a country tax business investment and activity at a high rate without adversely affecting its economic performance. In recent years, many countries have recognized this fact and have moved to reform their tax codes to be more competitive. However, others have failed to do so and are falling behind the global movement.

And here’s how the United States ranks.

"The United States provides a good example of an uncompetitive tax code. …the United States now has the highest corporate income tax rate in the industrialized world. …The United States places 32nd out of the 34 OECD countries on the ITCI. There are three main drivers behind the U.S.’s low score.

"First, it has the highest corporate income tax rate in the OECD at 39.1 percent. Second, it is one of the only countries in the OECD that does not have a territorial tax system, which would exempt foreign profits earned by domestic corporations from domestic taxation. Finally, the United States loses points for having a relatively high, progressive individual income tax (combined top rate of 46.3 percent) that taxes both dividends and capital gains, albeit at a reduced rate."

Here are the rankings, including scores for the various components.

You have to scroll to the bottom to find the United States. It’s embarrassing that we’re below even Spain and Italy, though I guess it’s good that we managed to edge out Portugal and France. 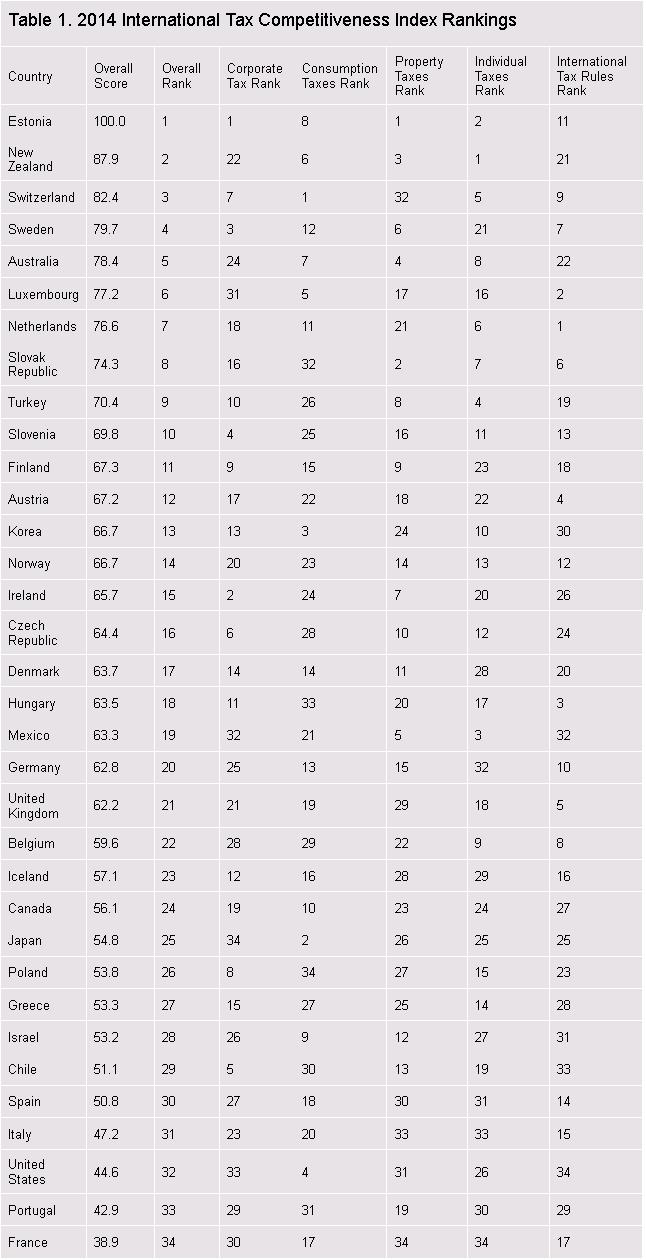 Looking at the component data, all I can say is that we should be very thankful that politicians haven’t yet figured out how to impose a value-added tax.

But rather than focus too much on America’s bad score, let’s look at what some nations are doing right.

Estonia – I’m not surprised that this Baltic nations scores well. Any country that rejects Paul Krugman must be doing something right.

New Zealand – The Kiwis can maintain a decent tax system because they control government spending and limit government coercion.

Sweden – The individual income tax is onerous, but Sweden’s penchant for pro-market reform has helped generate good scores in other categories.

Australia – I’m worried the Aussies are drifting in the wrong direction, but any nations that abolishes its death tax deserves a high score.

To close, here’s some of what the editors at the Wall Street Journal opined this morning.

"…the inaugural ranking puts the U.S. at 32nd out of 34 industrialized countries in the Organization for Economic Co-operation and Development (OECD). With the developed world’s highest corporate tax rate at over 39% including state levies, plus a rare demand that money earned overseas should be taxed as if it were earned domestically, the U.S. is almost in a class by itself. It ranks just behind Spain and Italy, of all economic humiliations. America did beat Portugal and France, which is currently run by an avowed socialist. …the U.S. would do even worse if it were measured against the world’s roughly 190 countries.

"The accounting firm KPMG maintains a corporate tax table that includes more than 130 countries and only one has a higher overall corporate tax rate than the U.S. The United Arab Emirates’ 55% rate is an exception, however, because it usually applies only to foreign oil companies."

The WSJ adds a very important point about the liberalizing impact of tax competition.

"Liberals argue that U.S. tax rates don’t need to come down because they are already well below the level when Ronald Reagan came into office. But unlike the U.S., the world hasn’t stood still. Reagan’s tax-cutting example ignited a worldwide revolution that has seen waves of corporate tax-rate reductions. The U.S. last reduced the top marginal corporate income tax rate in 1986. But the Tax Foundation reports that other countries have reduced “the OECD average corporate tax rate from 47.5 percent in the early 1980s to around 25 percent today.”

This final excerpt should help explain why I spend a lot of time defending and promoting tax competition.

As bad as the tax system is now, just imagine how bad it would be if politicians didn’t have to worry about jobs and investment escaping.

P.S. If there was a way of measuring tax policies for foreign investors, I suspect the United States would jump a few spots in the rankings.